The research focus areas of the Laboratory of Neurobiology and Pathological Physiology can be divided into two directions:

Nowadays, Alzheimer's disease belongs to the main social problems. The ageing population, that reaching still higher age, is connected with an increasing number of patients with Alzheimer's disease. It is a neurodegenerative disease of the human brain that is caused mostly by age, however, genetics and lifestyle are of great importance. The aim of our laboratory is to discover causes of the pathogenesis of Alzheimer's disease on its molecular basis. Our lab, as the first, showed a relationship between Alzheimer's disease and the gene for CD36 receptor (Šerý et al., 2017) and the gene for ALOX5AP (Šerý et al., 2016). In addition, we collaborate with a wide range of institutions (psychiatric and neurologic) from all over the Czech Republic. The NGS (next generation sequencing) technology is used in our research.

Research on alcohol use disorder

Alcoholism arises as a gradual adaptation of the human brain to a regular intake of alcohol. Nevertheless, alcohol-related dispositions have been shown to be approximately fifty percent hereditary. Our laboratory builds on previous achievements in the field of alcohol abuse-related research, when we first demonstrated a relationship between disposition to alcohol dependence and the gene for IL6 (Šerý et al., 2003) and between colour vision deficiency caused as a result of an excessive alcohol consumption and the gene for BDNF (Šerý et al., 2011). Currently, with respect to these findings, we are focused on consequences of alcohol intake, particularly in relation to a glutamatergic system (Šerý et al., 2015, Kashem et al., 2016, Kashem et al., 2017). For the purpose of this research, we utilise RealTime PCR, Western blot, fluorescence, confocal and electron microscopy.

In addition to five basic taste modalities (sweet, sour, salty, bitter and umami taste), a growing number of evidence pointed out a possibility of taste perception of fatty acids. This taste modality is important for the final taste of fatty food. Nevertheless, each individual perceives the taste of fatty acids differently and as our laboratory (in cooperation with foreign institution) showed, the perception of fatty acid taste is a genetically influenced trait (Sayed et al., 2015, Mrizak et al., 2015, Daoudi et al., 2015, Karmous et al., 2018, Plesnik et al., 2018). Moreover, it was found out that detection threshold of fatty acids affects not only our food preferences but also could be a risk factor for obesity. Our laboratory deals with the genetic analysis of the gene for CD36 receptor in relation to tests of the fatty acids taste in volunteers.

Our laboratory has continued the projects of prof. Míšek a prof. Vaněk. In collaboration with dental clinics, we focus on mutations that cause dental agenesis (oligodontia, hypodontia). Dental agenesis is manifested as an absence of one or more teeth, that do not develop at all. It is caused by a mutation in genes that are important for teeth development. Our lab revealed a previously unknown mutation in the gene for PAX9 (Šerý et al., 2015) and in the gene for MSX1 (Bonczek et al., 2018) in families that have oligodontia in anamnesis. Again, NGS (next generation sequencing) technology is utilised in this research.

According to the World Health Organization, age-related macular degeneration is one of the most common causes of blindness nowadays. Age-related macular degeneration is a multifactorial disease whose risk factors include higher age, inappropriate diet, smoking, cardiovascular disease, etc. In addition, a genetic component is of great importance. Thus, our laboratory conducts research on the genetic influence of this disease. We revealed and described the relationship between the gene for CD36 and an increase of intraocular pressure after administration of Avastin into an eye (Matušková et al., 2018).

Lyme borreliosis is a disease that occurs as a consequence of bacteria Borrelia genus infection. It is transported to a patient's body by blood-sucking arthropods, especially the Ixodes ricinus tick. Our laboratory conducts systematic investigation of ticks from the entire Czech Republic by employing the RealTime PCR method and other analyses. Further, positive samples are analysed by utilising DNA sequencing. In addition, individual species are determined. Moreover, our laboratory revealed the presence of Borrelia spielmanii in the territory of the Czech Republic (Bonczek et al., 2015).

Our laboratory cooperates on all the above-mentioned research activities with the Faculty of Science of Masaryk University. Thus, in our laboratories, students of biological and biochemical fields of study are encouraged in the preparation of bachelor's, diploma and doctoral theses. However, we also welcome new colleagues from experienced professionals. 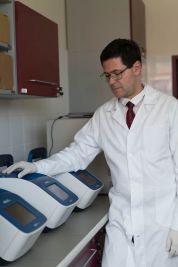 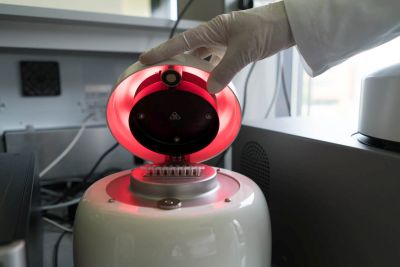 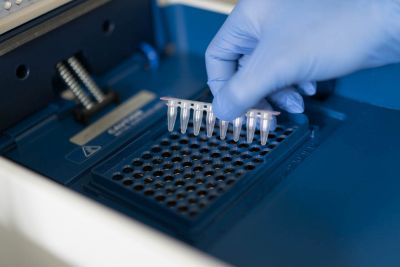