Knowledge of developmental processes is a key to understand causes of developmental abnormalities or to uncover the origin and diversification of lineage-specific structures during vertebrate evolution. Our laboratory focuses on fundamental morphogenetic processes in organogenesis with special interest in formation of craniofacial structures and limb patterning. Novel molecules and unique roles for known molecules are investigated during cell proliferation, adhesion, migration, differentiation and cell death. Particular attention is paid to hard tissues development, including teeth (odontogenesis) and bones (osteogenesis). Physiological aspects at molecular and cellular levels are investigated and related developmental disorders are examined. Along with increasing longevity of human population, complications related to bone and dental tissues become a significant medical and scientific issue. We use in vivo, ex vivo and in vitro approaches in several experimental models including mice, pig, chicken and chameleon embryos to reveal underlying developmental mechanisms. The effort of LMM is also to contribute to recent knowledge in basic and biomedical research with links to practical applications in tissue repair and regeneration.

RECENT PROJECTS IN THE LAB

Study of developmental processes determining the number of tooth generations

Teeth develop through reciprocal interactions between the neural crest-derived mesenchyme and the ectoderm of the oral cavity. The recent project focuses on the signalling processes between these structures that underlay successional dentition development. Our aim is to uncover developmental processes contributing to the replacement tooth formation and their comparison in species with two and multiple tooth generations with aim to reveal species-specific differences, which underlay early regression of dental lamina in animals with limited number of successional generations. We also focus on the role of angiogenesis in lamina regression and molecular base of lamina asymmetrical growth into the mesenchyme, which is crucial for establishing of necessary space for successional tooth initiation. Understanding how tooth number is controlled is an important step in our understanding of developmental defects that arise during this process in human.

Tooth replacement in Vertebrates is initiated from a dental lamina. Lifetime and morphology of the dental lamina differ among species depending on how many generations of teeth are initiated during the animal’s life. In recent project, we analyze the localization of SOX2 and LGR5-positive stem cell niche during early odontogenesis and the fate of these cells. Furthermore, we evaluate gene expression profile of LGR5-positive cells with aim to determine signals controlling the formation of the dental lamina. We use both gain-of-function and loss-of-function approaches to determine a role of WNT signaling in successional dental lamina initiation. We expect that uncovering of detail regulation of stem cells maintenance in the dental lamina can lead to the elucidation of the processes, which underlay species-specific potential to form certain number of tooth generations as well as the pathological conditions in human where replacement tooth formation is disrupted.

Pathophysiology of Sprouty proteins and their association with ciliopathies

Carcinomas of the oral cavity and oropharynx belong among the ten most common malignancies in human population. In this project, we focus on the most common squamous cell carcinoma. The prognosis of these malignancies is determined by the degree of invasiveness of the primary tumor and by the extent of metastatic spread into regional and distant lymph nodes. The intensity of perineural invasion correlates with tumor localization, its extent, and the presence of nodal metastases. In our project, we will focus on the detection of clinically relevant somatic mutations in patients with perineural invasion and the evaluation of early molecular markers during perineural invasion, which are expressed on the interface between tumor and surrounding tissues. Moreover, we analyze role of primary cilia and Sonic hedgehog paracrine signaling in tumorous cells and the effect of altered SHH signaling on perineural invasion. Our aim is to introduce new protocols into routine histopathological diagnostics aiming to predict future cell behavior, which will improve planning and management of the subsequent therapies in patients. 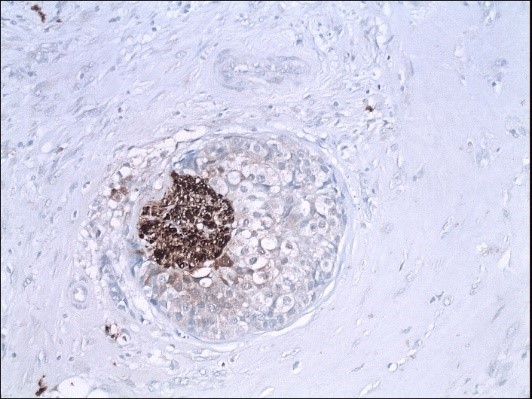